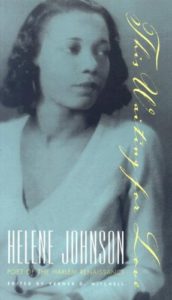 Upstairs on the third floor
Of the 135th Street Library
In Harlem, I saw a little
Bottle of sand, brown sand,
Just like the kids make pies
Out of down on the beach.
But the label said: “This
Sand was taken from the Sahara desert.”
Imagine that! The Sahara desert!
Some bozo’s been all the way to Africa to get some sand.
And yesterday on Seventh Avenue
I saw a darky dressed to kill
In yellow gloves and swallowtail coat
And swirling at him. Me too,
At first, till I saw his face
When he stopped to hear a
Organ grinder grind out some jazz.
Boy! You should a seen that darky’s face!
It just shone. Gee, he was happy!
And he began to dance. No
Charleston or Black Bottom for him.
No sir. He danced just as dignified
And slow. No, not slow either.
Dignified and proud! You couldn’t
Call it slow, not with all the
Cuttin’ up he did. You would a died to see him.
The crowd kept yellin’ but he didn’t hear,
Just kept on dancin’ and twirlin’ that cane
And yellin’ out loud every once in a while.
I know the crowd thought he was coo-coo.
But say, I was where I could see his face,

And somehow, I could see him dancin’ in a jungle,
A real honest-to cripe jungle, and he wouldn’t leave on them
Trick clothes-those yaller shoes and yaller gloves
And swallowtail coat. He wouldn’t have on nothing.
And he wouldn’t be carrying no cane.
He’d be carrying a spear with a sharp fine point
Like the bayonets we had “over there.”
And the end of it would be dipped in some kind of
Hoo-doo poison. And he’d be dancin’ black and naked and gleaming.
And He’d have rings in his ears and on his nose
And bracelets and necklaces of elephants teeth.
Gee, I bet he’d be beautiful then all right.
No one would laugh at him then, I bet.
Say! That man that took that sand from the Sahara desert
And put it in a little bottle on a shelf in the library,
That’s what they done to this shine, ain’t it? Bottled him.
Trick shoes, trick coat, trick cane, trick everything-all glass-
But inside-
Gee, that poor shine!